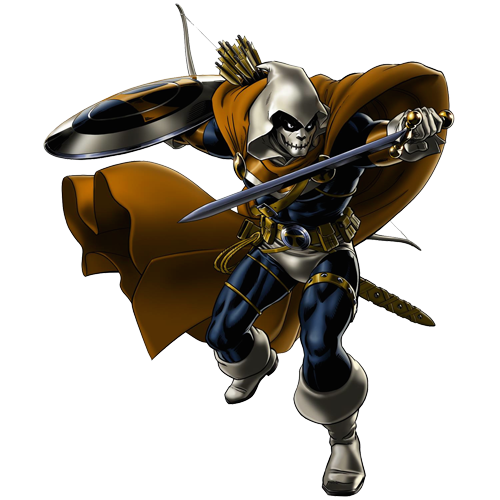 Zanoah Anton
anthony "tony" masters x taskmaster
"I got this...memory thing. I pick up anyone's moves just by seein' 'em. That's a lotta data. More'n my brain's got room for, I guess. So I...forget things. Things that ain't about combat, about survival. People, places...I can't remember what I did last week. By Monday, I probably won't remember this conversation."

suppose it's befitting that a boy found in an abandoned crack whore's bathtub, an umbilical cord snaking from his navel, bloodied and pink and half as shrivelled as the pot-bellied baby it snaked from, should be named desertion; forgetfulness. there was a lot about his growing years, say from birth to age 15, that zanoah would prefer to forget. and try he did. in fifteen years he had been passed from one shelter to another, from trailer to circus to a fine selection of youth homes. it started with elisha, probably the only face he will remember in the years to follow. his address was her sister's house somewhere in chicago but he grew up in elisha's trailer enduring a revolving door of men who each taught him love was fickle. (he was a fast learner so after maybe the first three dudes, the events became painfully predictable.)

he lived up to his name a second go, this time pushing a thumbs up into the traffic of interstate-35. upon rescue, he was then cared for temporarily by the stiff upper lipped Hendersons whose daughters were gymnasts and ballerinas and snotty nose brats who dressed him up in tutus and taught him how to pirouette! and accomplish elaborate stunts on the pull-up bar much to the unease of their parents who feared his safety. then entered the staunched Catholic duo who were determined to 'fulfil God's plans for them' until Mrs Jesus felt the 9-year old was too much of a seductive force for her husband to contend with. what skills he gained from them he has happily forgotten.

then entered the fat texan who supplied child-made handicrafts and carved belts to tourist magnets, and from him he likely learnt the most. less from the arts and crafts sessions and more from watching too many talent shows on TV and gulping down too much coca-cola. at 10, he learned to break dance. a pint-size kid spinning on his elbow was absolute novelty, and he was spared the belt, or, well, belt-making duties and rented to the street where he performed amongst other child prodigies who could swallow fire, beatbox, moonwalk, do back flips up and down the sidewalk and what have you -- he was quick on the uptake and became, before long, the indisputable main attraction on Hollywood & Vine. wanting out, he squirrelled away handfuls of dollar bills and hitched a ride as far from LA as possible on the eve of his turning 12.

then came three years he can't remember. not even vaguely.

disgruntled case worker, latifah jones, only reappeared in his life after his one-too-many trips to the hospital--a fractured spine, a twisted arm, a sprained elbow, a dislocated kneecap--it all became difficult to ignore, really. he was committed to a home for unwanted boys where a library of new skills was unlocked: petty theft, swindling, and a whole lot of macgyver stunts involving paper clips. under latifah's supervision, tales about bathtubs and shrivelled umbilical cords permuted awfully. she drove him to and from meetings with a jaded counsellor who chucked books at him and did little cerebral investigating of the professional sort. still zanoah appreciated the weekly hour-long break from chores when he could pore through shelves of books on child psychology, trauma and one book about raising german shepards. much about his condition, the lost years, was learnt and though inexpertly, at 15, he was self-diagnosing his problems with memory loss.

after leaving dr prashanti's office, he'd endure the 30-minute drive back to hell listening to latifah pervert his already wounded memories. one day it wasn't a bathtub he was found in but a plastic bag stuffed with a chaos of cigarette stubs and soda cans, and left by the stairs of a public school. blue from cold. on other drives it wasn't a tier of steps but by a rubbish container or it was a bathtub but it was filled with water and bloody placenta and he was blue from lack of oxygen, and that's why you're so goddamn afraid of water, kid.

zanoah spent a great deal of nights recording each version of his rescue and tried, relying solely on the facts he knew for certain, to narrow down the possibilities through a complex process of elimination. for instance, he couldn't have been in the water because his vocal cords were damaged from a prolonged, excessive bout of wailing as a newborn, for which he had underwent surgery and was, so accordingly, cursed with an odd pitch to his voice. unless, of course, he wasn't a baby but a toddler when his vocal cord corroded -- or maybe he wailed from a beating and lost his voice for a week after that, an experience he taught himself to 'recall' in exquisite detail so it became very likely the truth.

what he does remember was being born -- as in literally. he remembers being in his mother's womb, the tug and pull of his gestating body forming like a mutating clump of play-doh, and how it was suddenly warm and comforting and noise-cancelling. dr prashanti contradicted this claim. not possible to remember such an experience, She claimed. yet on nights when it was cold, he would cocoon himself in pillows and felt blankets and was certain that this was close to the feeling. perhaps it was a person's embrace, you recall, She suggested. and he'd feel sick thinking of the embraces he'd suffered.

he also remembers feeling very cold, of course he only recognised the sensation as such when he was first introduced to the warmth of an LA summer, his bare chest sweaty and heavy in the heat of a promising sun as he sprawled out in the back of the fat texan's truck, roving between states, and basking shamelessly. stupidly contented.

how he got from chicago to texas to cali and finally to boston, massachusetts, he can't remember anymore. he knows, though, that what he doesn't record he sometimes forgets and that there's little of late that he finds worth recording. he knows that the more information he draws from books, vampiric in his thirst for knowledge, the more he forgets all that ugly non-academicy...stuff. his reward for nurturing his unceasing curiosity.

now 26, there's a lot he knows and little he recalls. "Anthony Masters is one of the best agents S.H.I.E.L.D has to offer. After being sent in a mission to take down Horst-Gorscht and ODESSA, a neo-nazi organization hidden in Bolma that was working with Baron Von Strucker's HYDRA by developing Super Soldier Serums for them using Adolph Hitler's blood. By the moment Tony arrived to Gorstch, he was already hit by a bullet and was delusional, he told Tony about a perfected serum he developed which would not only boost people to peak levels of what was humanly possible, including assimilating knowledge instantly. However the ODESSA structure began to collapse, this in combination with Gorstch's death would mean all his notes and knowledge would have been lost forever and the serum wouldn't have been able to be replicated. In the heat of the moment, Tony injected himself with the newly developed Soldier Serum for him to memorize Gorstch's notes and escape from the structure quickly. As a side-effect of the Serum, Tony developed a degree of amnesia and created an alter-ego called "Taskmaster" which worked as a mercenary for criminal organizations and whatnot."

Succinctly put, Tony began human but injected himself with an experimental Nazi serum which allows him to instantly memorize motor skills at the cost of his true memory.

Despite his newfound powers, he lost "explicit memories" of Mercedes, his wife, having had no recollection of ever being married. Mercedes has had luck restoring portions of his explicit memory. However, these memories are immediately lost again the moment he learns the movements of another being.